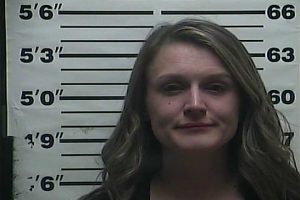 On Nov. 24 at approximately 2:15 a.m. Weakley County Sheriff’s Department deputies received a call of a rollover crash without injuries near Martin on Highway 22.

Upon arrival, Sergeant Shannon Neal made contact with the driver, 27-year-old Krista Pritchard. Pritchard and her two sons, ages two and three, appeared to have no injuries.

Upon investigation of the crash, Neal noticed an alcohol odor and had Pritchard perform a battery of sobriety tests in which she performed poorly on. She stated that she had drank one beer around 7 p.m., however the tests reflected otherwise.

Pritchard then stated that she takes Lexapro, Buspirone and Lamotrigine as anti-depressants which are known and strongly advised against taking while drinking alcohol.

Pritchard was arrested for DUI first offense, two counts of child abuse and neglect and violation of implied consent law.

DISCLOSURE: All information obtained came from the affidavit of complaint filed by the Weakley County Sheriff’s Department Sergeant Shannon Neal.