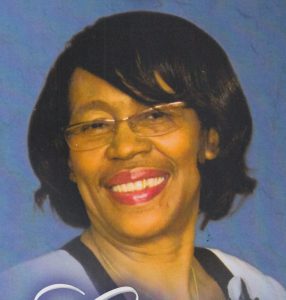 Clara Frances Jones Hamilton, when asked what she was doing would reply, “I was somewhere listening for my name.” On Tuesday, June, 7, 2022, at 9:45 a.m. God called, she heard and she answered.  Clara was born July 14, 1944, in Primm Springs (Hickman County), to the late Ms. Frankie L. Jones and William Edward Dobbins of Nashville. She began her education at Church Training School and moved to Martin in 1952 and continued her education at Weakley County Training School. Clara accepted Christ as her personal Savior at an early age, and in 1975, she became a servant in the House of the Lord at McCabe United Methodist Church, where she was very active until her health failed her. Her mission was always to help others, so that her living would not be in vain. She was a member of the Senior & Spirits of Love Choir, Sunday School Superintendent and teacher and communion steward, United Methodist Women and McCabe Food Pantry. She was a member of the Martin/Weakley County branch of the NAACP, where she held numerous positions. Always willing to assist, council and serve wherever called upon. She leaves to cherish her fond memories, her husband of more than 60 years, James D. Hamilton Sr.; two sons, Rev. James D. Hamilton Jr. (Diedre) of Paris and Roland Dwayne Hamilton of Martin; three daughters, Cheryl Hamilton and Anita F. Hayslett (Jerry), both of Martin and Chevelle Lewis (David Earl) of Knoxville; as well as two daughters-at-heart, Linda Carmichael of Alexandria, Virginia and Tonyua Vonner of Martin; her brother, Gene Jones (Shirley) of Martin; her sister, Kathy Vincent of Martin; as well as sisters-at-heart, Barbara Bell (Donnie) of Bossier City, Louisiana, Wilsie Moorehead of Oklahoma City, Oklahoma, Martha Bobbitt of Trenton, Earnestine and Martha Ann Dobbins of Nashville; two dear sisters-in-law, Shirley Jones (Gene) and Lula Evans (Payton); 16 grandchildren; 16 great-grandchildren; and a host of nieces and nephews. Her brother Joe Lloyd Crutchfield of Martin preceded her in death.