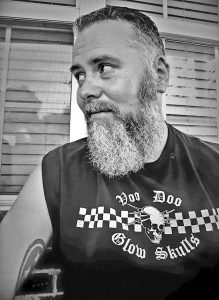 Michael passed peacefully at home surrounded by his loved ones. Michael was preceded in death by his parents, James Arthur Hester and Judy K (Erwin) Hester; paternal grandparents, Thomas H. Hester and Muriell (Morouney) Hester; and maternal grandparents, James William Erwin and Omelda (Lacewell) Erwin. Michael is survived by his loving wife of 12 years, Carrie (Casteel) Hester and their daughter and “best-buddy,” Karen Elizabeth Hester; sister, Jennifer (Jerry) Ramsey; brother, John (Nicki) Hester; step-mother, Lana (Redmond) Hester; and a host of uncles, aunts, nieces, nephews and cousins. Michael grew up in Sharon, TN. He attended the University of Tennessee at Martin, graduating with a BA in Graphic Design. In 2006, he moved to Antioch, TN and began working at ProTech Industries where he was a CNC programmer/operator. Michael loved horror films (especially the terrible ones), and he was a music-lover. He lived for going to shows and getting in the pit. He absolutely loved sharing his musical discoveries with his friends and anyone who would listen. Many of Michael’s friends and family members credit him with influencing their musical taste. Michael had an amazing sense of humor. His jokes were often hilariously dark and inappropriate, and could keep us in stitches. Michael was a wonderful husband, father, friend and grill-master. He will be truly missed by all who knew him. Services for Michael are still pending currently.