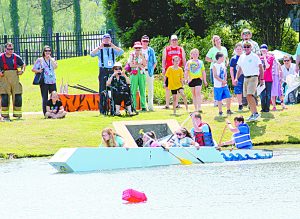 GOING DOWN — The Flounder may be a fish, but it did not go very far without turning over in Discovery Park of America’s Cardboard Regatta races on Saturday. The boat was made by the South Fulton High School physics class and was manned on separate races by students Karlee Meadows, Blake Johnson, Alexis Brown, Owain Ballance and Carly Robertson. Making their move behind The Flounder was Jacob Foltz and Nicholas Sterrett in the Dawn Treader, which was made by the Westview High School STEM Club. The Dawn Treader was also manned during a separate race by Sarah Foltz and Destin McKeel. In the school division, The Titanic award went to the SS Minnow, which was made by Union City High School’s STEM Club and manned by James Gregory, Ariel Hughes and Grace Baker. 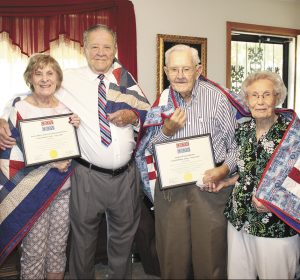