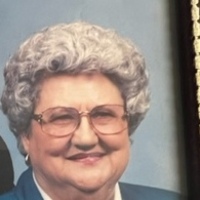 Helen Rebecca Dortch Olhausen (called Johnny by her parents) of Martin, Tennessee died Tuesday, August 2, 2022, at Van Ayer Nursing and Rehab Center in Martin. She was the only child of Hezzie Lee Dortch and Minnie Gertrude Dortch. Helen lived all of her life in Tennessee except for a two-year stint during WWII when her father, grocery store owner, felt obligated to help in the war effort and moved to Detroit to work in a plant making vehicles for use in the war. Helen attended Martin High School but graduated in Michigan while her family sojourned there. She was a long time member of Oak Hill United Methodist Church in Martin, a church built in 1880 in part by Helen’s great-grandfather. After high school graduation Helen was employed by the Farm Credit Bureau in Martin for twenty-five years followed by employment for four years at City Hall in Dresden. James W. Olhausen and Helen met while students a Martin High School. In 1989 they came together again and were married. They lived the next nine years in Jackson, Tennessee until his death in 1998. Helen was preceded in death by her husband, James W. Olhausen, her parents, Hezzie and Minnie Dortch, by cousins, Ruth Ann Atnipp, Charles W. McClain, Jane Jennings Alexander, Billy Johnson, Shirley Alexander and Mary Ann Baxter; by sisters-in-law, Mary Ruth Keas and Darius Cain. She is survived by cousins, Pam McClain and Jean Johnson; by step-children, Jamita O. Allen and David K. Olhausen; by friends, Donna Martin, Matt and Carla Butler and Russelene Baker; by sisters-in-law, Normagene McHughes and Joy Duke, by friends from Oak Hill Church and other friends too numerous to name. Helen embraced life and life returned the affection. Funeral Service will be Saturday, August 6, 2022, 12:00 Noon at Oak Hill Methodist Church with Rev. Cathy Barnett officiating. Visitation will be Saturday at the church beginning at 10:00 A.M. until funeral time at noon. Burial will follow in Oak Hill Cemetery.