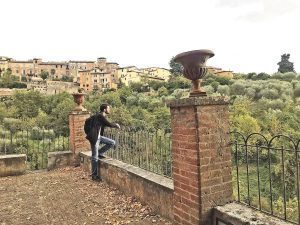 A partnership between the University of Tennessee at Martin and the Dante Alighieri Society in Siena, Italy, has made it possible for UTM students to take part in an ongoing study abroad program. Six students through Dr. Jeff Longacre’s “Creative Non-Fiction: Travel Writing” class are a part of this unique program and plan to tell about their experiences living, traveling and studying in Italy for a series in The Press. The third segment comes from UTM student Ethan Tester, who talks about a late morning spent lost in Florence.

I knew something was wrong because, as I lay in my bed that morning, light was coming in through the window at an unusually early hour. I reached across my nightstand to grab my phone and, to my horror, it was 9 a.m. I knew that I had set my phone’s alarm to 6:30 a.m., but I had heard nothing. I leapt out of bed in a panic, but knew there was no way I could make it to the bus stop in time to meet up with my classmates. By now they had already boarded the bus to Florence.

I quickly scrolled through my contacts in WhatsApp and made a call to Dr. Longacre. After coming to my senses, and realizing there was no way he would receive my call without Wi-Fi (a necessity for WhatsApp), I called my friend, T. He just so happened to be at the school’s office and acted as a medium between me and the secretaries, who got me in touch with my Art Appreciation professor, Rebecca, who was leading the trip to Florence. I made contact and she proceeded to send me step-by-step instructions on how to buy a bus ticket to Florence, board the bus, get off at the right stop, and walk to a meeting place. After receiving more information than I ever needed, I rushed to get ready before heading out the door.

My plan was to take the 11 a.m. bus for Florence, then meet up with Rebecca and the group at 12:30. I checked my phone for the first time as I left my apartment — 10:50. With 10 minutes to spare, I was swinging my legs in a fast-walking motion, dodging in and out of oncoming pedestrian traffic, always looking over my shoulder for the next moped or electric car. I know how to get to the bus stop. I’ve known for some time. It was the first place I ever stepped foot in the Siena. But, with less than 10 minutes to make it to my location, constantly passing street after street that all looked the same, I began to doubt. Luckily, I managed to regain my bearings as I felt my way around the city using familiar Sienese landmarks. Soon enough, I was at the bus stop. But my mission was far from over — I needed a ticket.

I ran past restaurants, their outdoor tables full of people having pleasant days despite my personal tragedy, and made my way into a Tabaccheria (tobacco shop) — a catch-all convenience store that also sells bus tickets. “Mi scusi. Can I, uh, buy a bus ticket to Florence … for 11?” The man across the counter studied my face for a second. He must have thought I had shot someone and was fleeing the city before the police appeared.

“Yes, tickets are always the same price.” I’m not quite sure he understood me.

The man nodded and slid me the ticket as I gave him eight euro, fifty. “Grazie,” I said, running out of the door and into a considerable state of confusion. I began studying the overhead panels of the buses, trying to find the one that said “Firenze Rapido” (Firenze is Italian for Florence and Rapido means it is direct), but there wasn’t a single bus with this marking. I looked down at my ticket. Sure enough, it read “Firenze Rapido.” Five minutes left. My bus must have arrived by now. As soon as those five minutes passed, down came my bus bearing the gospel of “Firenze Rapido” scrolling across its screen. I waited for the bus to come to a halt and climbed aboard. As I validated my ticket at the front of the bus and took a seat in the back, I began to feel a sense of pride. I was on a bus to Florence, and no one was helping me. No one was looking over my shoulder; I was on my own. Sure, without Rebecca or T, I wouldn’t be on the bus. And, sure, I was running several hours late, but that didn’t stop me from feeling confident about the way I had handled the situation.

I knew I had arrived in Florence after crossing the Arno River. Seeing that river flowing around the city, so full of life, was the moment my excitement regarding what all I might see that day sprouted. First, however, I had to use the instructions Rebecca had sent me to locate the group.

The bus pulled into our final stop. Santa Maria Novella, I had repeated to myself mentally, hoping not to forget it. I got off and was immediately met by the stench of Florence. Although the smell didn’t follow me throughout the entire city, something in the air around that bus stop was tainted with sulfur. As I stepped into sunlight and breathable air, I quickly realized I had no idea where to go.

I pulled out my phone and scrolled through Rebecca’s instructions. My best bet, I thought foolishly, was following the map she had sent, comprised of a satellite photo of Florence and a blue line tracing a path through the city. I looked at the map, then at my surroundings, and resolved to go straight, past the bus stop and down the street, in the direction of one of the many cathedrals. Before I made my way toward what I hoped was my destination, out of the door in front of me came a barrage of older American tourists. I knew they were American because they not only spoke English, but also had seemingly no regard for anyone else on the sidewalk. I followed closely behind them, only because they were going in the same general direction as me. It didn’t take long for me to realize I was lost.

I approached one of the women in the back of the group, “Excuse me. Hi. I couldn’t help but notice you all spoke English, and I was wondering where you guys were from.”

Thanks; couldn’t tell. “Cool, could I actually ask where you guys are going? I’m kind of lost, to be honest.”

“Okay, thanks anyway!” If I smiled at her, it was insincere.

I was surrounded by buildings and things, but they all looked the same to me. I couldn’t make out where Rebecca’s map was taking me. I was hopeless.

A man randomly walked up to me and began speaking in Italian. “No italiano,” I said.

“Ah, English. Where are you from?” I could tell from his accent he was African.

“Really?” It was at this point in the conversation that I realized he was probably going to try to sell me something.

“Yeah, he lives in Los Angeles. Here! Take this!” Before I knew it, I was wearing a black, leather bracelet with an emblem of an elephant in the middle.

Since he was being so generous, I figured I might as well ask him for help. “Do you know how to get to this art gallery?” I pointed at the map.

“Then here, you can give them these!” That was when he started handing me bracelet after bracelet. How many friends did he think I had?

“Oh no, I can’t pay for these. I don’t have any money.” As soon as I said that, he was gone, and his bracelets with him. Although I did get to keep the one I was wearing. I guess he had forgotten about that.

I trekked through street after street, until I finally made it to the Florence Cathedral. I was immediately taken aback by how incredibly tall and bright the building appeared in the midday sun, but I had no time for sight-seeing. Still lost, I figured my best bet was to enter into one of the nearby cafes for their Wi-Fi.

“I’ve got kind of an emergency, and I was wondering if I could use your Wi-Fi,” I told the young man at the cash register, hoping he knew some English.

“You have to buy something, of course.”

Alright fine, I thought. I’ll buy something cheap. I grabbed a bottle of Fanta and took it to the register. After paying, and getting access to the Wi-Fi, I sat down. I managed to get in touch with Rebecca who simply responded, “Send me your position.”

I told her where I was and she told me to wait. I took my things outside and waited in front of the Florence Cathedral.

I had just about lost hope when suddenly I saw the bright smile of Dr. Longacre, wearing a flat cap and a pair of aviators. Beside him was Rebecca, looking relieved. “You made it!” she exclaimed. She was right. I had made it to Florence.

Posted in This Just In and tagged Florence, Italy, travel-study program, UTM 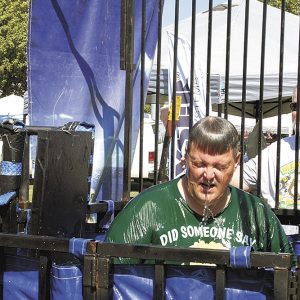 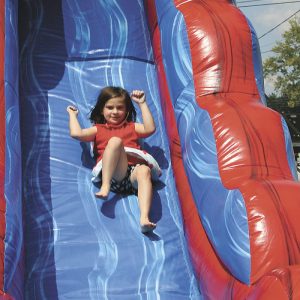 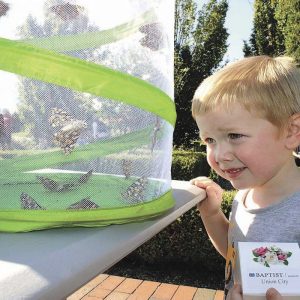